The EON-ELSI Winter School: Interdisciplinarity at its finest

Many institutes and organizations host short, intensive courses, in which students come together for a short time to learn a particular topic or technique. This is a great opportunity for students to either study a specific topic rigorously, or to learn something in a field orthogonal to one’s own. Recently, we had the opportunity to design and hold such a course, sponsored by both EON and ELSI and held on the ELSI campus at Tokyo Institute of Technology. Now, because of the sheer number of similar types of these courses that exist around the world and in all different disciplines, we definitely wanted to make something different. Something that would stand out from the others. Hence was born the EON-ELSI Winter School.

As members of the organizing committee of the Winter School, our task was to design a two week course, completely from scratch, that covered the important topics in the entire breadth of the field of Earth-Life Science. How could we make this school different and stand out from the others? What could make this winter school unique? 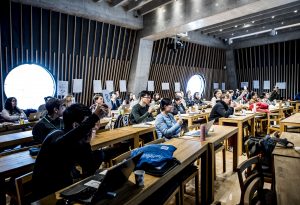 Active learning in the classroom with old-fashioned clickers

First of all, since the field of Earth-Life science contains so many different research subfields, we wanted to make sure that the Winter School hit on one major point that could differentiate it from the others: interdisciplinarity. ELSI is an inter- and multidisciplinary research institute that focuses on solving important questions in Earth-Life Science. These questions cannot generally be answered with a simple single-discipline approach; rather, an interdisciplinary approach with teams composed of researchers from various backgrounds is required, something that ELSI is uniquely positioned to do given the range of its researcher’s expertise. Because of this, we did not have to go far to find instructors with the breadth of knowledge we wanted for this Winter School. Of course, it’s certainly true that the final contributor/instructor list did contain researchers from various external organizations both domestic and international, a large majority of the instructors were from ELSI. (And again, thanks so much for all of the instructors who took time out of their busy schedules to contribute to the Winter School, especially those who travelled a long way!) 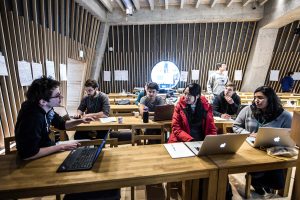 Additionally, very often in classroom situations what is presented during a seminar or a lecture, although interesting and important, may not be easily directly applied to someone’s research. Thus, ideas presented in the classroom may end up passively ruminating in the corner of one’s brain. Instead, things that are presented in an active way in the classroom, either through participatory learning or through practical demonstrations, are more likely to be incorporated into a student’s active thinking. Because of this, we wanted to incorporate hands-on projects and tutorials (in a wide variety of fields, of course) that the students could personally learn and do in a short period of time. This way, the students will have learned and produced something tangible by the end of the session. 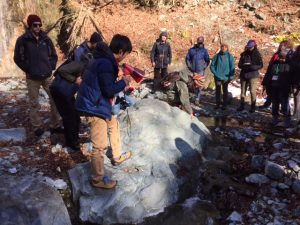 Studying the geology near the Kannawa Fault

Finally, us researchers at ELSI are always treated to something that can’t be easily accessed by those at international institutions: Japan. Japan is such a geologically-diverse nation, we knew we wanted to incorporate many different aspects of local geology that students couldn’t get anywhere else. And what better way than to see these things up close? Thus, we designed a short field trip for the students to go and explore some unique local geological features. Our local field experts were able to show the students faults, hot springs, geysers, plate boundaries, volcanoes, and much, much more, while in the classroom we were treated to special seminars by researchers with expertise in local geology, local gaseous volcano disasters, and even with a visit to the Tokyo Tech Archean rock museum!

Taking microbial samples from the hot spring at Mine Onsen

With these major goals of emphasizing interdisciplinarity, hands-on tutorials, as well as the unique geology of Japan, we hoped that students around the world would be excited by this opportunity to really experience the entire breadth of Earth-Life science. The response was overwhelming. We received 227 applications, far more than we had initially expected,  from all 6 populated continents (but we even had an application from a student who does research in Antarctica!) and also a gender ratio of about 50% women and 50% men! In the end, we chose students who we thought would really embrace the idea of an interdisciplinary school with relevance to applying new ideas to their own research, but also were willing to contribute something from their own research to apply it to other students’ research fields. 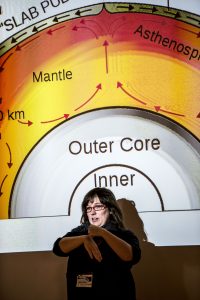 Even the instructors were excited to learn about something new!

In the end, the students who did end up coming were a really diverse group from all different research fields (life sciences, Earth sciences, physical sciences, and even science education!) and institutes based in many different countries (Japan, USA, France, Germany, UK, Brazil, South Korea, India, Australia, and Thailand; this doesn’t even count the fact that the students from some of these institutes were themselves already from a different country). They all really embraced the spirit of the Winter School, as they all participated and engaged fully in the field portion, the tutorials and projects, and the wide variety of seminars. It’s such an interesting experience to see a biologist ask really hard questions about how the Earth’s mantle moves, a geologist give it their all to study the metagenome of an underwater hydrothermal system, or a researcher who normally simulates planetary formation go into the lab for the first time and grow bacteria isolated from their own nose! 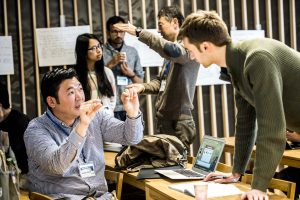 Now as the students return to their home institutions, we hope that what they have gained is a deeper understanding about the importance of interdisciplinarity to answering important questions in modern science, and especially the field of Earth-Life science. The international network of researchers they have cultivated in just two weeks will be a great resource for each of them in the future, not only due to the breadth of research expertise, but also the unique cultural insights that each person was able to contribute and the international friendships each was able to cultivate. Hopefully, they will all have ample opportunities in the future to collaborate with one another and we all can’t wait to see what the future holds for these students. 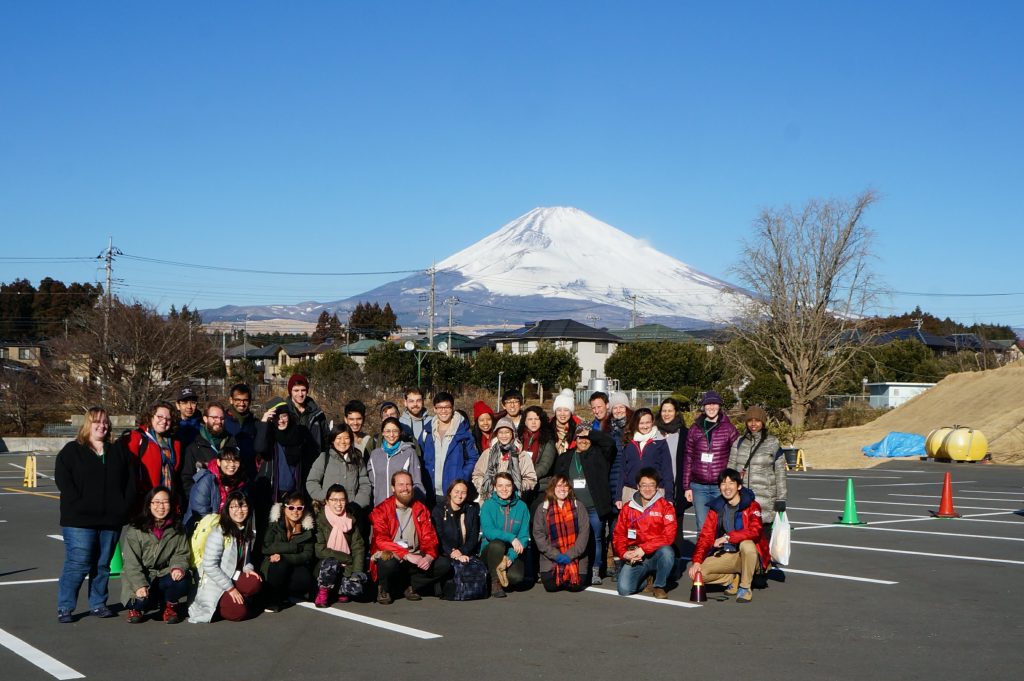 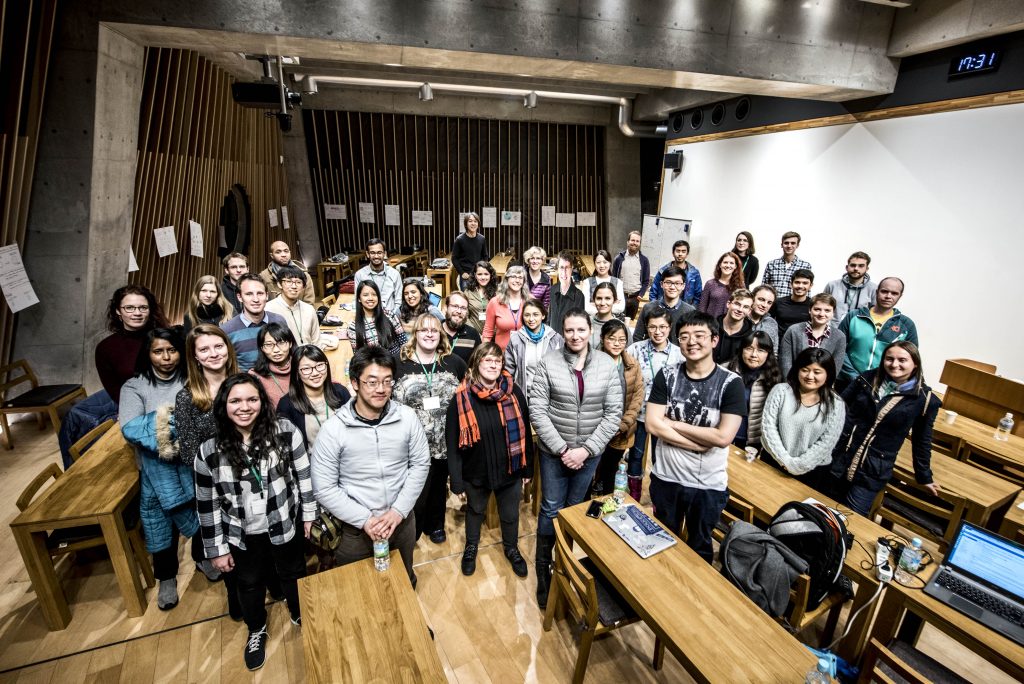 We’re all waiting for the next edition of the winter school! Until then!

In the meantime, check out the official #ELSIWS Storify for a tweet-based recap!